"There will rise, believe me, comrade
A star of captivating bliss, when
Russia wakes up from her sleep
And when our names will both be written
On the ruins of despotism."

(Pushkin to Chadeev, 1818, cited by Orlando Figes in in the introduction to Pushkin's History of Pugachev)

What does the term, ruin, connote? What makes something worthy of being called a ruin? A ruin is something more than a collapsed or demolished building. To be a ruin, something must hold our sentimental attention and call forth feelings of awe and wonderment. A ruin is a collapsed architectural structure--with pretensions to grandeur. 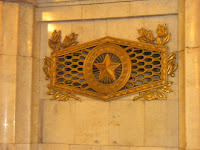 Visiting St. Petersburg, one would expects to find ruins everywhere. Since the city was only founded in 1703, we can't expect to find any building fragments with ties to antiquity. Even so, since we know that one of the world's grandest and most destructive experiments in living was launched here in the city, we expect to see the physical fragments of the greatest social phenomenon of twentieth century on almost every street corner. Surprisingly, these fragments aren't all that easy to find, at least in the historic heart of the city.

Of course, the physical manifestations of seventy years of Soviet rule do in fact exist; they are just less prominent than one might expect, at least in the city's tourist areas. The vast majority of Lenin statues have been removed, though a few still remain. Totalitarian governmental buildings and monstrous housing projects do the landscape, but are overshadowed in the historic heart of St. Pete by the works of Italian and French masters of the eighteenth century. Here and there we notice a socialist realism frieze or statue. Here and there a hammer and sickle or red star adorn a building wall or metro stop. But the era of the Soviet Union isn't all that easy to spot unless you know what you're looking for.

There are a few museums that bear witness to the triumphs and tragedies of the birthplace of Bolshevism. The Museum of Political History, for example, is housed in the famous palace of ballerina Mathilda Kshesinskaya, where the Bolsheviks once convened, and where Lenin once preached to his followers from one of the balconies. But the home of the Petrograd Soviet, the Tauride Palace, is no longer a monument to the Soviet idyll, but rather a working governmental building dedicated to the Russian-dominated Commonwealth of Independent States. The nearby Smolny Institute, Lenin's home for a brief period, site of the Kirov assassination, and home to the Bolshevik Party during 1917, still exists. And a Lenin statue there hasn't been removed. But the Smolny Institute, as opposed to the cathedral, doesn't seem to be on anybody's tourist agenda. The guides don't mention the Institute at all.

To be a ruin, something must be much more than merely a remnant of the past. A ruin is a Romantic concept, a monument to a great (though not necessarily good) but defeated cause. St. Petersburg is home to myriad physical reminders of an important era in the life of the nation. However, the Russian people haven't apparently had either the time or the inclination to romanticize their grim past by highlighting the ruins in their midst. 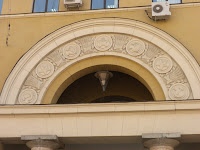