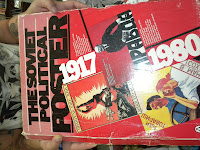 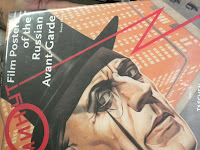 On a recent trip to the Bay Area I went looking for Russia. When you're in Northern California, you're in territory that was once explored, and claimed I believe, by Russia. How do you celebrate this trace of Russia in the contiguous 48? You visit Sevastopol, California (a let down--It's near Nappa but I had imagined the Crimea and the gorgeous Black Sea Coast) and you explore anarchist-collective book stores in Haight Ashbury with whole shelves devoted to Russian anarchists. (Yes, of course, I was offered weed soon after, and wouldn't have had it any other way).

At one other book store, I found cheap Russian novels, some no more than a dollar or two. As I approached the register, the young clerk smirked and said: Do you like Russia? I assumed he was making fun of me. Perhaps he was. But he and his co-worker professed a love for Russia. While we briefly discussed our favorite Russian authors, the co-worker dashed downstairs to pull out two rare books on the Soviet Union that were out of print, in her private collection, and definitely not for sale. The pictures here are those books, which looked terrific. Perhaps some day I'll find them for sale. Another customer laughed at the Russian insanity, but it was Friday night and I reminded him that it was Friday night and thus everybody in that line was a geek with no right to guffaw.
Posted by Fur Coat